Google Glass could be a powerful tool for disruptive innovation in healthcare.

I joined the Glass Explorer Program and have started using Google Glass with a focus on finding medical uses for this type of wearable computing technology. While I believe that it is analytics capabilities that will allow us to realize the value of health information technology, the convergence of hardware and software combined with an explosion of wearable sensor technology is providing powerful opportunities for some disruptive innovation in the healthcare marketplace and the practice of medicine.Charles Webster, MD got me really interested in the potential with his presentation Google Glass and Healthcare Information and Workflow at the 2014 Healthcare Systems Process Improvement Conference held immediately before HIMSS 2014. Chuck has been posting about Google Glass for some time and one of his posts on the HIMSS Future Care blog is well worth reading. Some of the insights he brought in the post are:


"There’s lots of interest in Glass use by surgeons, EMTs, and nurses, for hands-free and real-time access to critical information. It’s justified. But there’s also been negative speculation about threats to patient privacy. What will patients think when they see their physician wearing Glass. In my opinion, it will become just another tool they associate with healthcare workers (less obtrusive than the head mirror that used to be a symbol of the medical profession). The bigger question should be, what will physicians and others think when they see a patient wearing Glass?"

I decided it was finally time to take the plunge and become a Google Explorer and got my Google Glass just in time for the annual HIMSS conference to end. For those who have not yet seen Google Glass or don't understand how they work, it is basically a computer strapped to your head in the form of a pair of glasses. It has a heads up display, voice activation and growing number of apps. Check out the Google Glass homepage to learn more. When you think about having all of the technology of a smartphone, and then some, incorporated into a pair of glasses it boggles the mind as to the various use cases for healthcare. I want to outline just a few and then think about what other innovative possibilities this type of technology could bring to the industry.Last year Dr. Rafael Grossman, a surgeon and one of the Google Explorers based in Maine, used Google Glass during a Percutaneous Endoscopic Gastrostomy procedure. He was careful to not stream any sensitive data out via Google Glass and wrote about theexperience on his blog. He said, "Obviously, the one of the main concerns regarding the use of Google Glass during surgery, with live streaming of data, would be to take every measure and to ensure the privacy of the patient’s health information." Using Glass in healthcare certainly faces some serious privacy and security considerations. But this technology also seems to be very well suited to solving some vexing industry problems such as emergency medicine, some surgery applications, and telemedicine to name a f.Steven Horng, MD MMSc at BIDMC 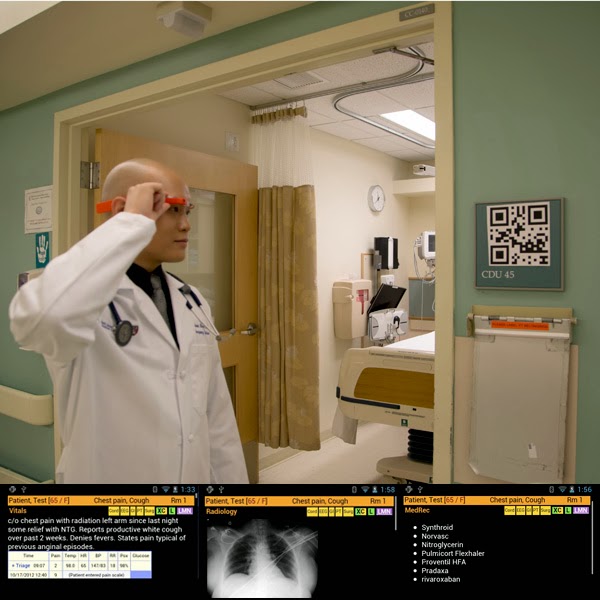 John Halamka, MD pointed out to me that over the past few months, Beth Israel Deaconess Medical Center has been the pilot site for a new approach to clinical information technology, wearable computing. In the Emergency Department, they have developed a prototype of a new information system using Google Glass, a high tech pair of glasses that includes a video camera, video screen, speaker, microphone, touch pad, and motion sensor. When a clinician walks into an emergency department room, he or she looks at a QR code on the wall. Google Glass immediately recognizes the room and then the ED Dashboard sends information about the patient that is in that room to Glass. The clinician can speak with the patient, examine the patient, and perform procedures while still seeing problems, vital signs, lab results and other data in view on the Glass screen. Beyond the technical challenges of bringing wearable computers to BIDMC, there were other concerns: protecting security, evaluating patient reaction, and ensuring clinician usability. I appreciate the measured approach BIDMC has taken in developing the potential for Google Glass and am looking forward to seeing how this works out.An internal communication at BIDMC states that staff has definitely noticed them and responded with a mixture of intrigue and skepticism. Those who tried them on briefly did seem impressed. I would be very interested in knowing how patients respond. Already, even bars in San Francisco are banning Google Glass so I can imagine that as word gets out there will be some consternation among certain patients visiting the ER. However, they have fully integrated with their EHR's ED Dashboard using a custom application to ensure secure communication and privacy safeguards. They also replaced all the Google components on the devices so that no data travels over any Google servers and all data stays within the BIDMC firewall. They will soon begin a trial of Google Glass for all providers in the Emergency Department and study patient and clinician impressions, and the usage patterns of staff."Over the past 3 months, I have been using Google Glass clinically while working in the Emergency Department. This user experience has been fundamentally different than our previous experiences with Tablets and Smartphones. As a wearable device that is always on and ready, it has remarkably streamlined clinical workflows that involve information gathering," said Steven Horng, MD MMSc who teaches at Harvard Medical School and works in the ED at BIDMC. After a patient presented with a massive brain bleed and was unable to communicate information concerning medications and allergies, there was serious danger to the patient. "Google glass enabled me to view this patient’s allergy information and current medication regimen without having to excuse myself to login to a computer, or even loose eye contact. It turned out that he was also on blood thinners that needed to be emergently reversed. By having this information readily available at the bedside, we were able to quickly start both antihypertensive therapy and reversal medications for his blood thinners, treatments that if delayed could lead to permanent disability and even death. I believe the ability to access and confirm clinical information at the bedside is one of the strongest features of Google Glass," said Dr. Horng via email.Google Glass is also being used at Rhode Island Hospital’s emergency department. As reported in the Providence Journal they will use Google Glass technology to stream live images of a patient’s medical condition to a consulting specialist located elsewhere. If this pilot is successful, project coordinator Dr. Paul Porter envisions an ambulance crew someday responding to a stroke victim, using the eyeglass technology to provide real-time video and audio to a neurologist back at the hospital who could then order a clot-busting, brain-saving drug immediately. "That would be like the Holy Grail," says Porter."“But we’re just at the beginning; you have to start somewhere."Hospital spokeswoman Ellen Slingsby says the emergency room sees about 100 patients a month with skin afflictions who require a dermatological consult. That should be a sufficient pool of prospective volunteers, Porter says, to adequately test Glass in the next six months. The team proposed the research to the hospital and later received funding for the project and so far the results are encouraging. They are using a solution from start-up technology company Pristine which created a Google Glass application that protects patients and meets federal laws for privacy so that no images or videos can be saved to the device. 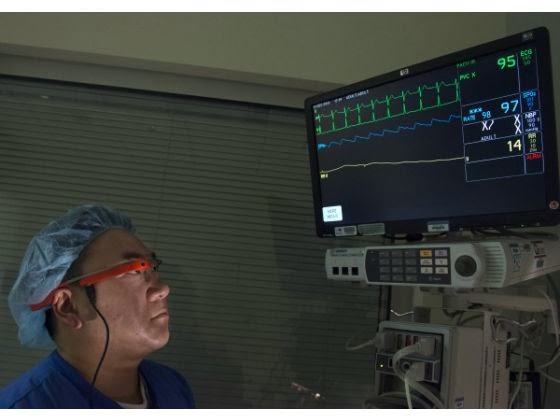 Pristine makes the app EyeSight, which enables physicians and nurses to transmit live video and audio of wound patients from Google Glass to authorized computers, smartphones and tablets. Since last October, Pristine has also been testing EyeSight through a pilot program with surgeons and anesthesiologists at UC-Irvine. The technology allows for more effective communication between UCI anesthesiologists and surgeons in the OR and allows for greater supervision of doctors-in-training. "We could be supervising two residents at the same time," says anesthesiologist Leslie Garson. Garson also said Glass has proved useful during the 15 or so surgeries he has worked on so far, especially because he often monitors two or even three surgeries simultaneously."A resident could have Google Glass on, they could be looking at a monitor, and I could have a tablet down the hall and could see exactly what they're seeing," he said. "They can send me an alert -- 'Take a look at this,' 'Is this something I should be concerned about?'"Dr. Patrick Hu (pictured at left) is an anesthesiologist at UC-Irvine and can share EKG information with other doctors via Google Glass. UCI Medical Center's anesthesiology department has been instrumental in pushing for this technology, according to the hospital.
At UC San Francisco cardiothoracic surgeon Pierre Theodore, MD is using Google Glass during surgery. pre-loads CT and X-ray images needed for a procedure, and calls them up in his Google Glass to compare a medical scan with the actual surgical site. "Often one will remove a tumor that may be deeply hidden inside an organ – the liver, the lung – for example," said Dr. Theodore, who’s also an associate professor in the UCSF School of Medicine. "To be able to have those X-rays directly in your field without having to leave the operating room or to log on to another system elsewhere, or to turn yourself away from the patient in order to divert your attention, is very helpful in terms of maintaining your attention where it should be, which is on the patient 100 percent of the time." He is the first surgeon to receive clearance for the use of the tech device as an auxiliary surgical tool in the operating room by a local Institutional Review Board (IRB), an independent ethical review board designated to approve, monitor and review biomedical research involving human subjects. He was introduced to the idea by Nate Gross, M.D., co-founder and medical director of Rock Health, a San Francisco-based digital health accelerator. Last summer Rock Health's 5th class had a few winners who are focused on Google Glass and the digital health sensor market.Other uses for this technology begin to stretch the bounds of my imagination. Just about anything we are using mobile devices for in providing healthcare could be possibilities for using this type of technology. Bedside medication verification, accessing patient health information, and overlaying information at the point of care, as well as all of the interesting pilots underway now. I am just getting started using my pair of Google Glasses and connecting with folks in the healthcare industry who are pioneering this technology. The next couple years will be some exciting times on this front. I'd love to get your thoughts on what some of the challenges and opportunities are in using Google Glass in healthcare.