Private Practice: The End of an Era or a Value Added Proposition?

Alberto Font
Judicial Investigation Police escort Dimosthenis Katsigiannis Karkasi out of his restaurant, Pizzeria Akropolis, near Calderón Guardia Hospital in San José on Thursday, Oct. 10. Karkasi allegedly connected victims with surgeons as part of an illegal organ harvesting operation.
Costa Rican Judicial Investigation Police (OIJ) arrested three doctors this morning and the owner of a pizzeria in the latest phase of an investigation into organ trafficking in the Central American country.
OIJ Director Francisco Segura estimated the number of victims at roughly 20, but said that the investigation was ongoing and encouraged others to come forward. The ring specialized in extracting and implanting kidneys.
These are the latest arrests in a three-month investigation into the kidney trafficking network allegedly headed by Dr. Francisco José Mora Palma, arrested in June, who authorities said had been operating the illegal network since 2009.
Thursday morning authorities arrested 48-year-old urologist Fabian Fonseca Guzmán; Massimiliano Anunzia Mauro Stamati, 41, urologist; Victor Hugo Monge Monge, 58, peripheral vascular doctor; and Dimosthenis Katsigiannis Karkasi, 55, owner of the Akropolis pizzeria.
The ring used the pizzeria near the Calerdón Guardia Hospital to recruit their victims. “Donors” would meet with Karkasi who would take them to another nearby location where they would be put in touch with the surgeons and exchange money.
Segura said that the arrests took place at the Calderón Guardia Hospital, in San José and another in Hacienda Pinilla, Santa Ana, Guanacaste. OIJ arrested Karkasi at his restaurant following the OIJ’s press conference Thursday morning.
Authorities also raided homes and offices for evidence, including documents and electronic equipment.
Acting Attorney General Carlos María said that those arrested played various roles in the ring, from its mastermind to recruiters to those “who bloodied their hands,” the surgeons.
The acting attorney general described the victims as people in dire straights or those with little economic means, but not necessarily indigent. He added that the victims identified so far came from various locations across Costa Rica.
Reportedly, “donors” were paid between $6,000 and $20,000 for a kidney. Jiménez said that the organs were likely sold for between $80,000 and $100,000 each.
Selling an organ is illegal in Costa Rica. Living organ donations are legal but only without monetary or other compensation or under duress. Jiménez said that the traffic of persons for the purpose of organ harvesting is punishable in Costa Rica with six to 10 years in prison under Article 172 of the Penal Code.
The investigation into the nationalities of those who received the organs is ongoing, according to law enforcement.
The OIJ director added that they would pursue recipients of the organs only if the practice of purchasing an organ was legal in their country of origin and they were brought to Costa Rica to receive the illicit transplant under false pretenses.

Calderón Guardia hospital in San José served as the scene of numerous illegal kidney operations for pay since 2009, according to the OIJ. Dr. Francisco José Mora Palma, arrested in June 2013, allegedly masterminded the black market organ trade.
Alberto Font
Earlier this summer, Israeli customs agents alerted Costa Rica were alerted to suspicious travel by two Ticos. The interim attorney general did not expand on the connection with Israel, noting that the case was one of many.
Jiménez said that the investigation currently focused domestically but if the evidence suggested that the ring had international reach they would pursue it.
While OIJ said that there was no evidence yet suggesting that the management of the private clinics where some of the illicit surgeries took place were aware of the trafficking.
In June, OIJ reported that some of the surgeries took place at the public Calderón Guardia Hospital and the private Clínica Bíblica hospital, both in San José.
This story is developing. Follow updates at ticotimes.net.

Posted by MRA Alerts and Updates at 6:25 AM No comments: 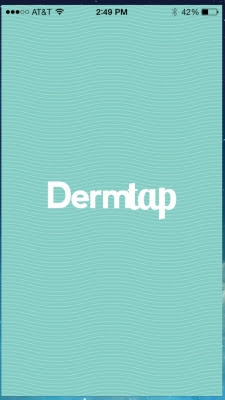 Stanford dermatology resident and founder of Medable, Dr. Michelle Longmire, took the stage at the USC Body Computing Conference to demonstrate Dermtap. Dermtap is a fully HIPAA-compliant mobile app for secure and safe image storing and sharing. With Dermtap, Dr. Longmire’s primary goal is to make “digital doctoring” a reality, enabling digital communication between patients and providers.
Currently, many physicians take photos of interesting pathology for sharing and teaching, but this practice creates a complex situation when it comes to patient privacy and intermingles medical and recreational photos. That’s where Dermtap comes in.
With Dermtap, a dermatologist can snap photos of interesting pathology and store these photos within the app’s servers, completely independent of your personal library.
Each case can have up to 5 photos, and each photo can be anonymized by covering up eyes or identifying features. With every photo, you can then share access to established teams (your group practice, for example), specific colleagues, or to any contact in your phone’s address book. 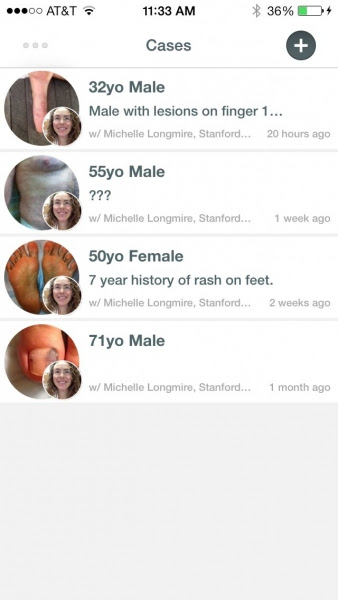 Other physicians that have been invited to access your case can contribute comments, or suggest diagnoses. The app intelligently provides a list of proposed diagnoses at the top of the comments with the ability for participants to vote for each diagnosis via a “like” button. One of my favorite features of the app is the fact that typing a diagnosis within the comment box’s free text instantly brings up an auto-fill list of diagnoses. This simplifies spelling (which can be a problem with many dermatological conditions) and also helps update the list of proposed diagnoses.  A simple and effective way to best understand the app is to watch the brief video located on their website.
As one would expect, patient privacy and security is a continual theme addressed effectively throughout the application. In order to successfully register as a provider, you must produce a valid NPI number. Furthermore, as mentioned above, every photo uploaded can be de-identified via censoring. Also, after a certain amount of inactivity, the app requires a password, preventing others from accessing your patient’s photos. 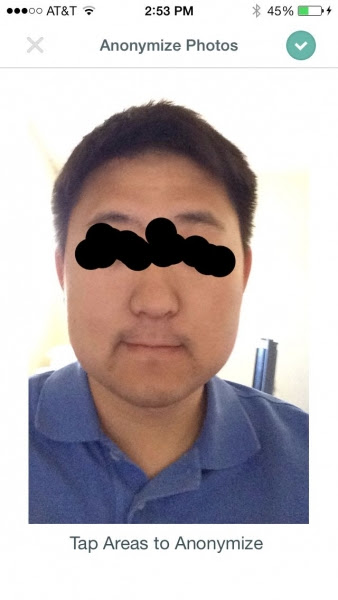 When signing up for the Dermtap service, there is a separate process for registration as a patient and as a provider. In the public beta version currently available on the app store, the registration process for patients is still restricted to an invite-only basis. Dr. Longmire explained to me that they plan to roll out the patient portion of the service in its next phase, which will facilitate patient-provider communication and sharing of photos.
With my brief time using the app, I have been thoroughly impressed with the simple and clean user interface. The bright colors and flat design fit right in with the recently introduced iOS 7. The app flows smoothly, and does not appear to “jump” around and does not have any noticeable lag, which commonly occurs with apps that heavily rely on the cloud. The ability to view multiple (up to 5) images within one case is also quite useful, as it provides additional perspectives on the progression of a disease, which is crucial for an accurate diagnosis. 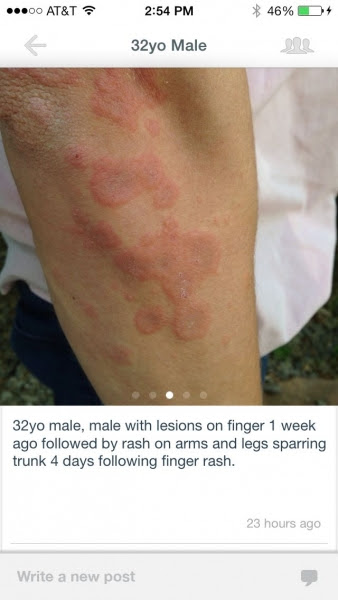 Most exciting of all, this clean and highly functional user interface is based on the Medable platform, which Dr. Longmire created as a tool to help other medical professionals make their app ideas a reality. The Medable platform is fully HIPAA compliant, features care collaboration between patients and providers, and supports image storing/sharing. For those of us who might not be dermatologists, her vision is that Medable can be the backbone for other mobile apps tailored for other needs or specialties. Dermtap shows us that digital doctoring for dermatologists is already here, and its Medable backbone promises that digital doctoring for the rest of us is not far behind.
App Store Link – Join the Beta Test. If you are interested in using Dermtap in your practice as a tool for patient image storage and sharing, please contact them at hello@dermtap.com.
This article is part of iMedicalApps’ coverage of the 7th annual Body Computing Conference, hosted by the USC Body Computing Center, which took place on October 4th, 2013.  The event showcases the cutting edge of digital health, in partnership with industry leaders and venture capitalists in biotechnology, telecommunications, entertainment, and design.

Posted by MRA Alerts and Updates at 6:18 AM No comments: