Latest NHS figures show that the number of patients going to accident and emergency departments has hit an all-time high. See how the data breaks down by age, waiting time and deprivation 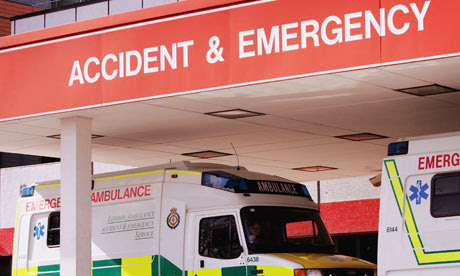 
The release today from the Health and Social Care Information Centre (HSCIC) shows that the number of patients going to A&E has been increasing over the past eight years, from 17.837m in 2004-05 to 21.739m in the first 11 months of 2012-13. Health correspondent Denis Campbell writes:

Figures released by the NHS's Health and Social Care Information Centre (HSCIC) depict a relentless rise in A&E attendances, but with a notably large jump occurring between 2011-12 (21.481m) and 2012-13 (21.739m after 11 months). The figures cast serious doubt on health secretary Jeremy Hunt's recent claims that the rise in A&E attendances was due to Labour's "historic mistake" in 2004 of letting GPs no longer be responsible for providing out-of-hours care.
The ageing population, and the fact that growing numbers of older people are suffering from one or more long-term illnesses, such as diabetes and breathing problems, are key factors in the ongoing surge.

If you've ever wondered when the busiest time is in A&E or what age group accounts for the highest number of patients, then this release is filled with just the details you were looking for. Below are some of the figures we've picked out of the report. You can access the full data by using the downloadable spreadsheet below.

Most patients arrive at 11am


96.7% of recent attendances were concluded in 4 hours or less - the NHS target is 95% - according to latest weekly data

You can find the full data behind this release in the downloadable spreadsheet.

http://www.guardian.co.uk/news/datablog/2013/jun/14/accident-and-emergency-attendence-age-waiting-time-deprivation
Posted by MRA Alerts and Updates at 10:08 AM