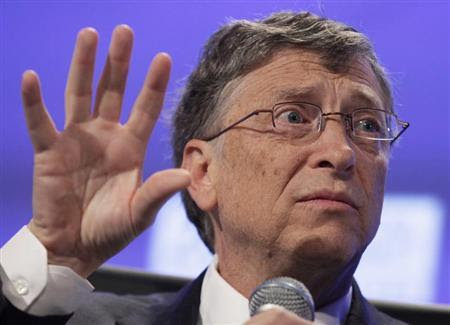 Bill Gates speaks during Peterson Institute 2013 Fiscal Summit on Facing the Future in Washington, May 7, 2013.
Credit: Reuters/Yuri Gripas
By Sarah McBride
SAN FRANCISCO | Tue Jun 4, 2013 12:03pm EDT
(Reuters) - Microsoft co-founder Bill Gates is leading a $35 million investment in ResearchGate, a Berlin-based network for scientists that ties into his interest in fighting disease.
ResearchGate allows researchers around the world to collaborate more easily. They might put out a call to colleagues to find, say, free samples of diseased tissue to analyze, or a partner to work with on a project.
A recent ResearchGate-launched collaboration between researchers in Europe and Nigeria resulted in the discovery of a deadly pathogen that had jumped from plants to humans, said ResearchGate Chief Executive Ijad Madisch in a phone interview.
The Bill and Melinda Gates Foundation works to eradicate the world's most deadly diseases and poverty. Founded by Gates and his wife in 2000, its endowment totals $36.4 billion.
A spokesman for the Gates family said the investment in ResearchGate was a private investment that did not come from the foundation. He declined to comment further.
The collaboration between Gates and ResearchGate developed after one of Madisch's existing backers, Matt Cohler of Benchmark Capital, introduced Madisch to one of Gates' advisers, Madisch said. Earlier this year, Madisch flew to France to talk with Gates about his start-up.
"He understands things extremely fast," Madisch said, adding that meeting Gates was a longtime goal because of the Microsoft founder's philanthropy. "It was the coolest meeting I had in the last year."
Gates is leading the investment with Tenaya Capital, a late-stage investment firm based in Woodside, Calif. Existing investors, Benchmark and Founders Fund, participated.
Madisch, a Harvard-trained Ph.D, co-founded ResearchGate in 2008. It now has 2.8 million members. Its most popular fields are biology, medicine and computer science, and its top four countries by membership are the U.S., India, the U.K., and Germany, a spokesman said.
Many German start-ups have become known for successfully replicating business models developed elsewhere, chiefly in the U.S., rather than coming up with their own ideas. Madisch hopes ResearchGate will help change that reputation.
When asked if he would ever consider taking an investment from the Samwer brothers, the German investors known for funding companies that excel at German replications of U.S. start-ups, Madisch said he would not.
"Definitely not," he said.


(Reporting By Sarah McBride; Editing by Bernard Or)
Posted by MRA Alerts and Updates at 5:59 PM