Medicare now penalizes hospitals for high readmission rates for acute myocardial infarction (AMI), congestive heart failure (CHF), and pneumonia. Anticipating the penalties,readmission rates have come down, though this does not prove a causal relationship. 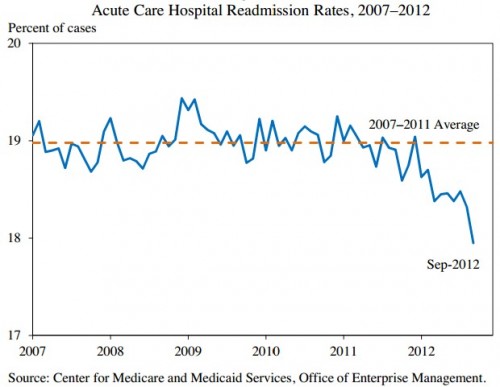 The chart illustrates a highly aggregated metric. Certainly readmission rates and changes in them vary by type of patient (in any number of dimensions). For example, recent work by Matthew Press et al. suggests that changes in readmission rates vary by condition severity.

The authors offer two possible explanations for these findings. First, condition severity may have worsened more than observed for high severity patients and not accounted for in the risk adjustment approach applied in the analysis. That is, the highest quartile of condition severity in 2007 may have represented sicker patients than the highest quartile in 1997 in ways that were not controlled for. Sicker patients are expected to be readmitted more. Another is that actual care delivered (e.g., quality of care transitions) worsened for higher severity patients relative to lower severity patients. This might also lead to relatively more readmissions for sicker patients.
Unfortunately, their analysis ends in 2007, well before the readmission rate reduction exhibited in aggregate since 2011 in the figure. An open question is how this downturn might have varied by condition severity.
http://theincidentaleconomist.com/wordpress/hospital-readmission-rates-by-clinical-severity/

Posted by MRA Alerts and Updates at 5:59 AM No comments:

ICD-10 Transition: Maybe it's time to panic a little


We are about 14 months away from the ICD-10 implementation deadline. Surveys report that healthcare providers are in various states of readiness.

QualiTest Group surveyed more than 300 professionals about their ICD-10 testing plans. The two major findings are:
While starting sooner than later is important, this survey doesn't raise too many alarm bells. It does report a great deal of planning and progress in the ICD-10 transition. Other surveys released in the past few months have found less preparation.

Perhaps a more troubling indicator is the amount of newly released literature that suggests there is an audience that hasn't heard of ICD-10 implementation. If the healthcare industry is on its way to a smooth ICD-10 transition, we wouldn't need so many guides to planning ICD-10 implementation.
Seriously. That's so 2012.

The latest example I found is the white paper ICD-10: The Top 10 Things You Need To Do NOW from the medical billing firm MediGain. They advise:
Healthcare providers should have completed half those steps by now.

If not, then they should download the MediGain white paper. It's actually a pretty good document to start. The more detailed ICD10 Watch Implementation Timeline will help explain what needs to be done.

Increasing Revenue and Planning for ICD-10: How Clinical Documentation Improvement Accomplishes Both

Dual-Coding: An ICD-10 Strategy You Can Take to the Bank

Bonnie Cassidy writes about why healthcare providers need to consider dual coding:
(For the Health of IT)

Three questions to ask your payers about ICD-10

Getting to the Good Stuff: An Active User’s Opinion of ICD-10

CMS has released the final update for the ICD-9-CM code set. It goes in effect Oct. 1. (Centers for Medicare & Medicaid Services)

Posted by MRA Alerts and Updates at 4:30 AM No comments: