The Future of Advanced Prehospital Care 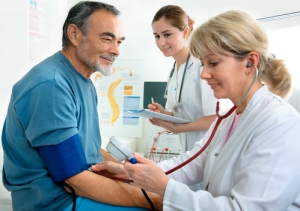 By: Christopher Matthews
Point of Care (POC) testing has been used by EMS for quite a long time. It allows the EMT and Paramedic to follow up on potential causes of a patient’s condition and rule out the things that could be a distraction to good care.

With POC testing, we can check the patient’s oxygen saturation, carbon dioxide levels, heart rhythm, blood sugar, carboxyhemoglobin, other blood gases, cardiac enzymes, and even the patient’s cholesterol.
POC testing used to take several minutes for each test, but with 21st century technology, multiple test results can be returned to us in less than five minutes. Some of the POC tests we can perform have nearly instant results. This can help guide us to provide more certain patient care. It can also help us avoid performing blanket treatments for several possible conditions, like the old fashioned “coma cocktail”.
We discuss some of the new POC options available for EMS field use in this article below. END_OF_DOCUMENT_TOKEN_TO_BE_REPLACED
Posted by MRA Alerts and Updates at 3:47 AM No comments:

By David Morgan | Reuters – 11 hrs ago
By David Morgan
WASHINGTON (Reuters) - The Republican-controlled U.S. House of Representatives voted to repeal President Barack Obama's healthcare reform law on Thursday in a symbolic move aimed as much at healing internal Republican rifts as demonstrating dogged party opposition to "Obamacare."
The 229-195 vote occurred largely along party lines and marked the 37th time the House has voted to repeal or defund the 2010 Patient Protection and Affordable Care Act, which is now in the final months before full implementation on January 1. Like previous attempts to dismantle the law, the measure will likely go nowhere in the Democratic-run Senate.
For Republicans, who hope to make Obamacare a winning campaign issue in the 2014 congressional midterm elections, the action gave House freshmen their first chance to vote against a law that is unpopular with a large number of voters, particularly conservatives in their districts back home.
"A full repeal is needed to keep this law from doing more damage to our economy and raising health care costs," said House Speaker John Boehner at a press conference alongside a seven-foot, three-inch tall stack of paper labeled "Obama Regulations @theredtapetower".
Democrats poked fun at the latest repeal vote.
"Apparently, the Republicans are opposed to Obamacare," said Representative Steny Hoyer, the second-ranking House Democrat. "I know that comes as a shock to America, so we need to tell them one more time. Or 37 times, or maybe a 38th or a 39th or a 40th or a 100th time."
The repeal measure was authored by Representative Michele Bachmann, former Republican presidential candidate and Tea Party leader, who sought to link healthcare reform to an Internal Revenue Service scandal that is threatening to undermine Obama's second-term agenda.
"No matter what, Americans will not want a politicized agency to have access to their most personal, intimate health care information or be in charge of important health care decisions," Bachmann said.
The reform law, Obama's signature domestic policy achievement, will bring sweeping change to the $2.8 U.S. trillion healthcare system and provide health coverage to 37 million people through subsidized private plans and an expansion of the Medicaid program for the poor.
The IRS would administer tax credits to help low-to-moderate income beneficiaries pay insurance premiums and levy fines against individuals and businesses that violate provisions requiring coverage.
The law has provided discounts on prescription drugs for the elderly, allowed millions of adult children to remain on their parents' insurance plans through age 25 and allowed patients to obtain preventive care without charge.
Boehner denied Democratic claims the bill known as the Patients' Rights Repeal Act was a waste of time. Instead, he said seven previous bills seeking to eliminate or narrow the reform law have been signed into law by Obama.
"Is it enough? No," said Boehner. But some progress has been made, and Republicans will continue to work to scrap the law in its entirety."
The vote also marked an effort by the Republican leadership to address lingering frustration among rank-and-file lawmakers who wanted an early repeal vote, but instead got a measure two weeks ago that would have directed resources to an ailing reform program that provides insurance for sick people through the end of 2013. Some Republicans were angry at the prospect of "fixing" Obamacare instead of repealing it.
"The disagreement over that was so fierce that it forced leadership to pull the bill," said Republican strategist Matt Mackowiak. "That had a lot to do with this."
The earlier measure, known as the "Helping Sick Americans Now Act," was aimed at denying the administration resources for implementing the healthcare law by redirecting funds to a temporary insurance program for sick Americans that is running out of money.
Congressional aides said the measure could be revived now that House members have had their chance to vote for repeal.
Much of the two-hour debate that preceded Thursday's vote followed familiar patterns of campaign rhetoric, with Republicans casting Obamacare as a budget-busting, job-destroying, cost-increasing white elephant and Democrats countering with predictions of job growth, healthier Americans and over $100 billion in deficit reduction.
(Additional reporting by Richard Cowan; editing by Andrew Hay)
Posted by MRA Alerts and Updates at 3:45 AM No comments: