In a number of the reports about NSA and especially PRISM, you will find references to a software platform called Palantir. For instance, it’s mentioned in this piece from the New York Times:

How the U.S. Uses Technology to Mine More Data More Quickly

By JAMES RISEN and ERIC LICHTBLAU | June 8, 2013
WASHINGTON — When American analysts hunting terrorists sought new ways to comb through the troves of phone records, e-mails and other data piling up as digital communications exploded over the past decade, they turned to Silicon Valley computer experts who had developed complex equations to thwart Russian mobsters intent on credit card fraud.
The partnership between the intelligence community and Palantir Technologies, a Palo Alto, Calif., company founded by a group of inventors from PayPal, is just one of many that the National Security Agency and other agencies have forged as they have rushed to unlock the secrets of “Big Data.” …

But, weirdly, that’s all The Times says about Palantir in their very long piece. But, in fact, Palantir was founded in 2004 by Peter Thiel and others. Yes, the same Peter Thiel who wants to create man-made ‘libertarian’ islands for privacy and freedom. Isn’t irony ironic?
But more troubling is that back in 2010 we were told by Joe Biden that Palantir was used to fight fraud in Obama’s Stimulus spending — and that it will be deployed at other government agencies, starting with Medicare and Medicaid.
From Wikipedia (but heavily sourced and the sources all check out):

Palantir was founded in 2004 by Peter Thiel, Alex Karp, Joe Lonsdale, Stephen Cohen, and Nathan Gettings. Early investments came in the form of $2 million from the CIA’s venture arm In-Q-Tel and $30 million from Thiel and his firm, The Founders Fund… Palantir’s name comes from the "seeing stones" in the Lord of the Rings.
Palantir was built through collaboration between computer scientists and analysts from intelligence agencies over three years, through pilots facilitated by In-Q-Tel. The software concept grew out of technology developed at PayPal to detect fraudulent activity, much of it conducted by Russian organized crime syndicates. The team realized that computers alone (Artificial Intelligence) could not defeat an adaptive adversary. Palantir allows human analysts to explore data from many sources.(Intelligence Augmentation)…
On June 18, 2010, Vice President Joe Biden and Office of Management and Budget Director Peter Orszag held a press conference at the White House announcing the success of fighting fraud in the stimulus by the Recovery Accountability and Transparency Board (RATB). Biden credited the success to the software, Palantir, being deployed by the federal government. He announced that the capability will be deployed at other government agencies, starting with Medicare and Medicaid…

So how will this technology not be used to target Americans? 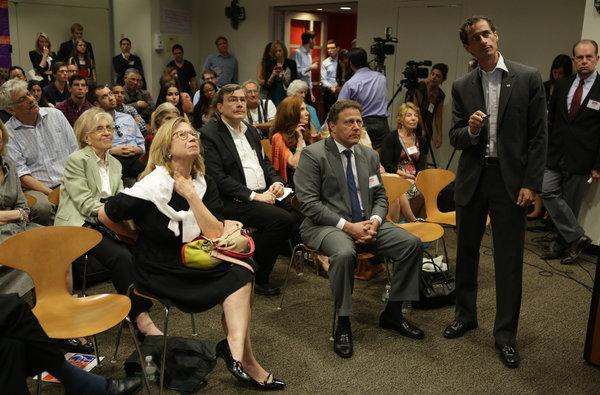 Mr. Weiner, a Democrat who championed a Medicare-for-all style of health care as a congressman, said his plan could curb the rise of $15.5 billion in city spending on health care and save money for raises for teachers and other workers, mainly by using the city’s muscle to reduce the profits or the role of private insurance companies.
In return, he proposed that 300,000 city workers and 300,000 retirees who now pay nothing toward their insurance premiums should pay 10 percent — 25 percent if they smoke. An estimated 500,000 undocumented immigrants would also be expected to buy in to the city’s insurance coverage, he said, describing it as a more cost-effective way to care for those whose treatment in emergency rooms and city hospitals already falls to taxpayers.
“This isn’t about who manages health care; this is about who manages the money in health care,” Mr. Weiner said, flicking through slides showing that city spending on workers’ health benefits was projected to rise by 40 percent from 2014 to 2017 under the current arrangement. Under an entrenched system partly codified in law, he said, a single private insurance company, Emblem, handles 95 percent of the coverage for the city’s workers, and a state board approves annual raises in the rates it charges.
Of insurance companies, he said, “Their job is to take in as much money as they can and pay out as little as they can.” The complexity and delays of private insurance processing are no accident, he added: “They make money on the float.”
Depending on the recommendations of a government task force he would create under a deputy mayor of health care innovation, he said, city coverage might still be placed in the hands of a different insurance company under a more competitive scheme, or the city might outsource just the administration to an insurer, as Medicare does while keeping overhead as low as 1.3 percent. A third option he listed would be for the city “to take the whole thing in-house.”
He said he would reorganize government agencies to seize opportunities presented by the Affordable Care Act, and have his health care innovation task force consider insurance terms that “keep more of the money in the city,” like allowing prescriptions to be filled at local pharmacies rather than only by mail order, or using the city’s development and investment capability to increase primary care at a hospital facing closure.
“This is not just a conversation you can have around cost,” he said, citing the nation’s experience in the 1990s with an H.M.O. model that no one liked, and calling the quality of health care in New York “a crown jewel.”
The coverage devised by the task force, which he called Thrive (standing for Taskforce for Healthcare Reform, Innovation and Vitality for Everyone), could eventually be offered to all New Yorkers by being listed on the state insurance exchange required by the Affordable Care Act. Such an experiment could not be tried in places like Cincinnati or St. Paul, he went on, but “New York is the health care capital of the world,” with more than 560,000 health care workers, including tens of thousands of doctors and nurses in the city’s own employ.
A single-payer model has been a hard sell nationally because of concern that it would reduce individual choice and increase government control over health care. Mr. Weiner would also have to win support from the city’s unions, which may demand raises high enough to offset any contributions they would be required to make to their premiums.
His talk, at a public lecture series sponsored by the Common Good, a nonprofit, nonpartisan organization, at a City University of New York branch on West 67th Street, stirred enthusiasm and interest. In the hour before he spoke, word of Mr. Weiner’s proposal galvanized other Democratic candidates for mayor to issue hurried news releases on health care.
Christine C. Quinn, the City Council speaker, drew attention to the BigAppleRx prescription drug discount card, established by Council legislation, which she said had saved more than 125,000 New Yorkers a total of $15,546,017 on prescription medications, or an overall savings of 47 percent, since May 2011.
Public Advocate Bill de Blasio cited health care positions from his policy book, which includes a pledge to enroll 600,000 uninsured New Yorkers in plans through the Affordable Care Act and to better protect community hospitals.
Mr. Weiner, asked how his health care plan compared with those of his rivals, said he was unfamiliar with theirs, adding with a grin, “And when I say unfamiliar, I may mean I don’t think they have any.”


A version of this article appeared in print on June 21, 2013, on page A19 of the New York edition with the headline: Weiner Wants City to Test Single-Payer Health Care.

Posted by MRA Alerts and Updates at 7:15 AM No comments: