While waiting for a state health-records exchange, medical society launches one 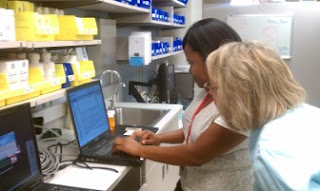 Frustrated that after 10 years of effort the state of Connecticut has yet to launch a functioning health information exchange (HIE) allowing physicians, hospitals and other health care providers to share patient medical records, the Connecticut Medical Society is offering one of its own.
Available to all clinicians in the state and called CTHealthLink, it is based on a system currently used in Kansas.

Part of the motivation was the threat that clinicians would miss out on Medicare and Medicaid incentives given for participating in a health information exchange and would instead be subject to penalties, said Matthew Katz, executive vice president and chief executive officer of the Connecticut State Medical Society (CSMS).

“The Connecticut medical society decided to go ahead and try to do it because our members are missing out on the opportunity for financial benefits,” and many have to pay penalties for not participating, Katz said.

For the 2017-18 federal fiscal year, only 800 of the eligible medical professionals and none of the eligible hospitals are expected to receive Medicaid incentive payments, according to planning documents for the state health information exchange.

In 2007, Connecticut first attempted to create a health information exchange (HIE) specifically for Medicaid with a $5 million grant, before most physicians had switched to electronic health records. It was cutting edge, but the state’s medical professionals weren’t ready for it, said Dr. Thomas Agresta, a professor and director of medical informatics in family medicine at UConn Health, who has been involved in HIE efforts since the beginning.

Between 2007 and 2016 the state tried twice more to design and implement an HIE for all providers. Neither attempt produced a functioning system despite extensive planning and $18 million in funding.

“Everybody was hyped up and interested in the potential for health, but not aware of changes that needed to occur,” Agresta said. “Most people were a little naïve in terms of complexity.”

Before deciding to join CTHealthLink, all providers — hospital systems, like Yale New Haven Health, private practices and physician groups — are facing this decision: Is it worthwhile to sign on with CTHealthLink or should they wait for a fourth attempt at a state HIE system to pan out?
A health information exchange allows any participating clinician to see the procedures, tests, lab results and medical histories ordered for their patients by other participating clinicians, preventing repetition that wastes time and money.

CTHealthLink also provides a portal that allows patients to see their own records, something providers have expressed interest in having at state-held planning discussions for attempt four.
Yale New Haven Health says it will need to make sure the CTHealthLink system would truly benefit patients and be cost-effective before signing up, said Lisa Stump, chief information officer for the hospital system.

“There are a few questions that need to be answered before I’m confident in submitting our data,” Stump said. “Is there good structure around opting in and out, so that patients get a choice” of whether to have their medical information shared?

Stump said Yale New Haven Health also would want to be sure CTHealthLink would improve care enough to make a subscription worth the cost. When the state system begins operating all hospitals will be required to join, whether they are part of CTHealthLink or not.


CTHealthLink will cost between $50 and $120 per physician per month, depending on when a facility joins, whether the physicians are CSMS members, and whether the provider is a very large practice or a hospital system, Katz said. There is also a set-up cost based on the internal records system a practice or hospital uses.

For an organization the size of Yale New Haven Health, which includes five hospitals and 3,500 to 4,000 physicians, it would be two or three times more.

“The benefit of any HIE is how robust the data are in the HIE. We are a large health exchange and have good sharing within our system” and with the Veterans Administration’s Healtheway system, Stump said. “Is that cost (of CTHealthLink) going to bring us a value more than the means we already have.”
And more than the state system will in the coming years.

Incentives for participation in an HIE are available to all physicians and many other clinicians through the Medicare quality payment program (MIPS). Eligible clinicians who don’t participate in MIPS by the end of 2017 would see a 4 percent reduction in their Medicare reimbursement in 2019.
“Even though it is starting late (in the year), it is more than enough time to get the federal benefits,” Katz said.

CTHealthLink expected to sign contracts in July and to begin sharing data between medical practices beginning in August and September. But as of August 15, none of the contracts had been finalized.
According to CSMS, the process has been delayed because determining the set-up cost each hospital or practice’s electronic health record vendor is going to charge is taking longer than expected.


The goal is to include at least 80 percent of the state’s 9,600 physicians in fewer than five years, Katz said.

Connecticut Hospital Association spokeswoman Michelle Sharp said the association “is pleased that CSMS is seeking a solution for its physician practice members who may need additional support to elevate their health IT infrastructure.”

CTHealthLink is set up like a central data warehouse that allows doctors and patients to view all their patients’ health records in one place, Katz said, with only a three-minute delay from the time an electronic health record is posted.

Katz said the model is much less expensive than others in use, and wouldn’t require any state or federal funding to operate. However, the state’s health information technology officer, Allan Hackney, said there are cheaper ways to do it.

“Whenever you bring data to the center, it is automatically a more expensive undertaking, because you have to curate the data, store it, secure it, back it up, you have to have disaster recovery, all those things layered across each other,” Hackney said.

Hackney’s position was created in 2016 after a third state attempt to construct an HIE by the Department of Social Services ended without a product and the responsibility was transferred to Hackney and an advisory council.

Despite the previous work, the fourth attempt began by working to understand what providers really needed, with $10 million in combined federal and state money.

The state knew from experience that if it were going to succeed this time, it needed the input of individuals who would be using the system as well as technology that wouldn’t become outdated before the project was complete.


At the same time, DSS requested more than $14 million in grant money — 90 percent percent from the federal government and 10 percent from the state — to implement a Medicaid-specific health information system that eventually would tie into the larger state system, if both are successful.
According to the office of the lieutenant governor, DSS needs to construct its own system as quickly as possible because of specific Medicaid reporting requirements.

But efforts to implement a strategy to make reporting for Medicaid easier have always been a central part of the state HIE efforts, whether they were led by DSS or not, and that is no different with the fourth attempt, planning documents show. But it is not clear when the universal statewide system would implement the needed Medicaid features.

The system is scheduled to be functioning by the beginning of 2018, but various features and access to different kinds of data will be added incrementally, based on priorities identified by the system’s users.

Unlike the CTHealthLink model, the state is working on a system that allows data to be pulled directly from its source instead of being gathered all in one location, a lower-cost and lower-risk option, Hackney said.

The state system will be built to connect all clinicians, from physicians to pharmacists to behavioral health workers, even if they are participating in CTHealthLink or any other, smaller exchanges already, Hackney said.

Eventually, the system will allow all medical information, including veterans’ information from the Department of Defense as well as prescriptions and immunization records, to be accessed by all participating medical professionals.

The order of the first few features to be created will be decided by September, according to the office of the lieutenant governor.

Despite the potential for a more user-friendly product, according to Hackney, this will take time, and Dr. Jeff Gordon, CSMS president, who works in a private practice owned by Hartford Healthcare, said the state already has lost the faith of many health professionals because of its many failed attempts.

Despite the previous failures, Agresta said he has more faith in the state’s latest attempt because the technology is finally ready for it.

“Unlike the first few attempts, when we tried to do this in the past, and very few people understood what exchanges could do, there is more understanding of data,” Agresta said. “During the 2010-2012 time frame, we were still trying to get physicians to adopt EHRs. Basically we were asking them to learn to crawl, to walk and to run all at the same time.”

Although CTHealthLink hopes the Kansas model will work just as well in Connecticut, Hackney is not as confident.

The difference in Connecticut, Hackney said, is that healthcare providers already have invested millions in their own internal systems, and the major providers of those systems have connections to allow record exchanges between clinicians that use the same vendor. Hartford Healthcare, Yale New Haven and Trinity New England, parent of St. Francis and St. Mary’s hospitals, all use the same vendor, Epic, and UConn Health is in the process of switching over to it, Agresta said.

Other hospitals, physician groups, behavioral health facilities and small practices have yet to be linked in such a way. They are still waiting for a system like CTHealthLink or the state system to connect them with their patients’ other providers.

Hackney said he doesn’t want Connecticut to fall into the same trap that many other states have, where systems are developed and then not adopted by many providers, or the systems become obsolete after only a short time as technology progresses.

“My view on this is that the only way state efforts will win is if it is collaborative and focused on value,” Hackney said. “If we focus on value, you know you’re going to hit people with a difference in the way they deliver health care.”

Read More
Posted by MRA Alerts and Updates at 6:17 AM No comments: